How We Teach: Encourage Curiosity

Motivate by Guiding Children to Ask Real, Meaningful Questions About the World First—Then Help Them Discover The Answers

Full of energy, a three-year-old never stops exploring, bombarding her parents with “why’s” from the moment she wakes until her final nighttime breath. Eager to finally be a big kid, a first-grader looks forward to his first day of school, and to begin the quest of elementary learning. Young children are innately curious. They implicitly understand that they need to learn in order to act, in order to live: they see that adults can do things they are not yet able to do, and they are motivated to acquire the independence of adults. They want to learn about the world and acquire the skills they need to act in it.

At LePort, we recognize this natural tendency. Our goal is to motivate our students by transferring their natural curiosity about the world into an academic setting. We aim to make sure that our students’ thirst for knowledge is satisfied by their school experiences. We want to keep your three-year-old’s genuine interest in the world alive, so that as a 14-year-old leaving us in eighth grade, she remains as excited about learning, in school and outside, as she was at the beginning. This is what we mean by our slogan, “Knowledge for Life”.

At LePort, we motivate by the “detective story principle”: we start with the child’s natural desire to learn, and appeal to that desire by presenting, at the start of a lesson, material that raises a question in the child’s mind. Once we have awakened his curiosity, we then present him with the content of the lesson – content he is eager to understand and apply because of the way it has been presented to him.

The question comes first, the content, second. In math, we puzzle the student by asking students to calculate “5+10*3” – and some come up with 35, some with 45 as the answer. Students are puzzled – and ready to discuss the rules for stipulating which order of operation is correct. In history, we ask them to think about their favorite things – foods, places, friends, clothes – and then ask them what would make them give all of those up. This sets the scene for discussing the asceticism of medieval monks, and their motivation for giving up all worldly goods.

More fundamentally, we motivate by ensuring that each student is sincerely interested in what we teach, so that he chooses to engage based on the content of our lessons, and not artificial promises of rewards or threats of punishments. We also don’t appeal to mere novelty; at LePort you won’t see ancillary hands-on projects without clear learning goals. Our emphasis on content-based motivation begins in Montessori, when children have a lot of choice in the work they do from preschool and into elementary; in literature, where we offer fascinating stories that draw the children in; in grammar, where we make diagramming sentences a fun game between two groups of students. 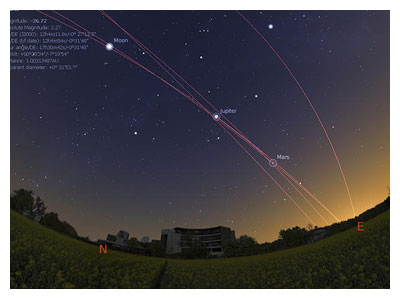 Why in the world would 5th graders care to learn about the “retrograde motion of planets”? At LePort, we teach astronomy by starting with observations – first, of stars and planets in the night sky which students log, then by letting them work with Stellarium, an online planetarium software. We ask them to log Mars’ position on the night sky, first by going outside for several nights, then, on an accelerated time line, within Stellarium.

We start the observations with time periods where Mars moves from west to east against the background of the stars, as planets do most of the time. After several exercises logging this movement, however, something strange happens: Mars moves from East to West – it has reversed direction! Our students are puzzled: they verify their work, and find the same result. They come to their teacher, and wonder if the Stellarium software has a bug, or if they made a mistake in their work. Our teacher tells them to just note their observations until the next astronomy class – by which time they are more than eager to learn about the retrograde motion of planets, and its role in the discovery of the heliocentric explanation of our solar system by Copernicus.