Part Two: One (of Many) Integrating Principles

What words came to mind when you watched the three videos we linked to in Part One of this post?

All of these describe what you see, in all three of these videos—and all of these are what children in Montessori experience every day.

When Ruby reaches for the toy, and her mother lets her struggle for it, instead of handing it to her, Ruby learns to be persistent, to work at what she wants. She learns if she works at something, she can get it. She learns that her mother trusts her to succeed, rather than bailing her out at the first sign of struggle. She gains the confidence that comes from slowly mastering her own body.

When Jackson walks into his classroom, he has the freedom to choose his activities. When he feels trusted, he will, over time, make good choices—empowered by the environment that enables him to complete his chosen activities successfully. When he gets to choose where to work, with whom, for how long, he experiences autonomy, a powerful motivator. When he can repeat an activity until he is done, without interruptions for mandatory group activities, he discovers the thrill of mastery.

When the little girl in the FastDraw video expands her division problem until it reaches from the ceiling to the floor, she experiences that the sky is the limit. She gets to know herself as someone who, with effort and persistence, can tackle touch challenges. She acquires a growth mindset (in addition to great math skills).

In all these examples, the common thread, the unifying principle that makes all others possible, is what Montessori educators call “freedom within limits.”

In Montessori, children at every level—infant, primary or elementary—spend their time in a carefully prepared environment. In that environment, they have a big say in what they want to do. They are free to act as they see fit, to make choices and experience the consequences. And yet, it is naturally healthy behavior, not anarchy, that reigns. Because the environment is prepared, a child’s spontaneous choices end up being directed towards productive, meaningful ends. The environment (and the teacher) provide a framework that guides and clearly delimits the exploration. The child is not abandoned or neglected; instead, she’s empowered and supported in her natural quest for learning.

Take Ruby. Her mother created a safe space, and equipped it with appropriate toys. She was there, next to Ruby, a presence in her daughter’s day. She also had the discipline of observing without interfering, a task that must not have been easy when Ruby struggled so much! Ruby was free to move, free to explore, within the safe environment her mother had set up, and within a safe emotional environment by virtue of her mother being there with her.

Jackson’s freedom is much wider than Ruby’s. He has the freedom to walk within the classroom at will, and even walk to other classrooms or maybe the yard without constant direction by a teacher. The limits aren’t that visible in the video—but that’s only because he has internalized them. He’s learned to walk around his peers’ mats. He’s probably using a calm inside voice. He knows to place his materials back on the shelf when he is done. And he knows, in accordance with the “ground rules” of the Montessori classroom, that materials which haven’t yet been demonstrated to him are off-limits until he is ready for them and the teacher gives him a lesson. He’s not tempted to grab a material from another child who has it, because he has internalized the simple rule that materials may only be taken from the shelves, never from another child.

The Montessori elementary child’s freedom to move about the classroom, to work with peers, to progress to whatever challenge she feels ready for (like ceiling-to-floor long division) is in sharp contrast to the adult-directed learning typically found in traditional schools. That freedom, again, takes place in a carefully designed environment. The young girl wasn’t able to just jump into long division on day one in first grade, because she wanted to touch the colorful materials. Instead, her teacher introduced her to materials by means of carefully sequenced lessons, each of which optimally challenged her, and then gave her space to explore and practice. Over time, through voluntary engagement, she became comfortable with numbers. The passion and confidence to tackle big problems also similarly grew in her over time, instead of being extinguished by handing out gold stars for minor achievements. The result was that she was both capable and eager to take on a big challenge, within a framework of inner and environmental limits.

“Freedom within limits” is a cornerstone concept within Montessori. It distinguishes Montessori from the two most common educational approaches. In contrast to traditional or classical education, which is largely determined by the teachers and adult led, Montessori allows true freedom and supports the child’s autonomy. In contrast to progressive education or the unschooling movement, which often lack clear limits or curricular structure, Montessori autonomy operates within the limits and guidance of a carefully prepared learning environment—an environment with clear rules, a carefully structured curriculum and deliberate coaching and guidance by a highly-trained teacher.

“Freedom within limits” is one of those hidden, beautiful ideas that make the Montessori magic happen. Look for it the next time you observe in a good Montessori classroom. I bet you’ll be surprised by how much it helps you understand just how different authentic Montessori at LePort is from the other educational alternatives you might consider. 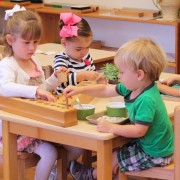 Discipline in the Montessori Classroom (2 of 2) 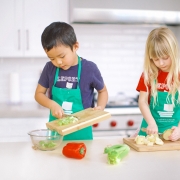 Setting up your home for Montessori baby
Scroll to top