For the preschool child, building his vocabulary and learning to handwrite and to read are arguably the most important academic skills to acquire. The broader his vocabulary, the easier reading comprehension will be for the child down the road – and 3-6 year olds learn even difficult scientific terms with ease. Thus, developing our student’s vocabulary is an important part of our primary classrooms.

Today in America, most educators believe that handwriting and reading are best taught to six or seven year olds, in Kindergarten and first grade – and most preschools therefore work on “reading readiness”, not actual writing and reading. In contrast, our students actually learn to write and read – a typical LePort Kindergarten student can read real books (not just sound out phonetic 3-letter-words), and pen full sentences in cursive handwriting (not just form a few print capital letters or trace his name.)

We teach writing and reading early – because, as Dr. Montessori has shown, 3 ½ to 5 ½ years are the optimal ages to learn these skills. Children at that age are interested in the sensations of language – its sounds, the movement the hand makes when writing a letter, the grip of the hand on the pencil – and they delight in the repetition necessary to perfect these skills. By carefully structuring the language program for our preschool students around their natural interests and abilities, we enable our students to joyfully learn to write and read long before they enter elementary school – and spare them the tedious effort and frustration that too many kids experience when learning these critical skills in a traditional elementary school setting.

The child, at the beginning of [this] period, is not interested in writing sentences or even words … paradoxically as it may seem, he is not interested in writing at all. What interests him are the purely sensorial aspects of the matter—the shape of the sandpaper letters . . . the fact—again a purely sensorial one—that each letter has a corresponding sound. He is at a stage where the world of touch means enormously more to him than to us.

What and How We Teach

In our classrooms, students learn writing and reading by engaging in a carefully graded series of exercises. The activities build upon the child’s interest in Practical Life and Sensorial activities and repetition, and break down the complex skill of writing into manageable components. 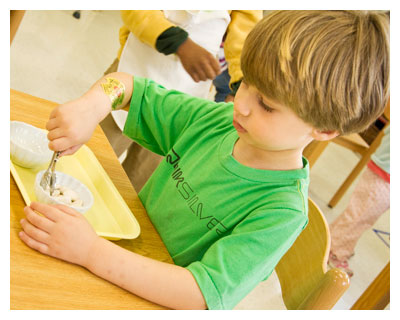 Indirect preparation. At LePort, we begin preparing children for writing as young as 18-months-old. Children in our toddler and preschool programs indirectly prepare for handling a writing instrument by means of various activities that help them to coordinate their fingers and strengthen their pencil grip. For example, when children manipulate cylinders or geometric insets in the Sensorial Materials, they do it by grasping the knob, which is about the same thickness as a pencil, with three fingers. They also use tongs to transfer buttons or small objects from one container to another in Practical Life. And they are guided to touch things lightly when they feel the outlines of wooden inserts or touch different grades of sandpaper in the Sensorial Materials, just as they soon will lightly move a pencil over paper.

Pencil grip: Metal insets. Building on these motor skills, the child learns to control a pencil; using special materials designed for the purpose, he learns to trace shapes and fill them in using colored pencils. To make the outline, he uses a piece of equipment called the Metal Insets. Each inset represents a different geometric shape. After selecting a figure and tracing it on paper, the child fills in the outline with a colored pencil. At first his strokes are inconsistent and often extend beyond the outline, but over time, as he practices over and over again, the lines become more parallel, and the coloring becomes more even. By combining different insets, children create complex geometric drawings—the “art of the inset”—in which they take great delight, and which we proudly display in our classrooms.

Phonemic awareness: Sound Games. A popular small-group activity in our primary classrooms are the Sound Games. In one of these games, the directress sits on the floor with a few children who have joined her by choice. She has in front of her a basket with different small objects that represent short, phonetic words using the short vowel sounds, such as a bed, a cat, a mat, a box and a cup. She holds up one item, and asks a child to name it. Then, she asks another child to say the beginning sound; the next child, the ending sound; and a fourth, the middle sound. The Sound Games train the children to listen for the sounds that make up the words of our language; they develop the basic phonemic awareness which later enables children to read and write.

Hand movements and letter-sound-correspondence: Sandpaper Letters. To relate the hand movements necessary for writing with the sounds of the individual letters, Dr. Montessori created Sandpaper Letters. Each letter is cut out of sandpaper and mounted on an individual tablet. The child learns to trace the sandpaper letters with his two working fingers (pointer and middle fingers) while the teacher (and later he) enunciates the corresponding sound. Use of this material gives the child a three-fold impression. He sees the shape, he feels the shape, and he hears the sound of the letter. The fact that the letter is made of sandpaper, rather than ink, invites the child to trace its shape. Observe that this material, like many others in our classrooms, is largely self-correcting, as the child can feel when his hand has erred in tracing the letter. 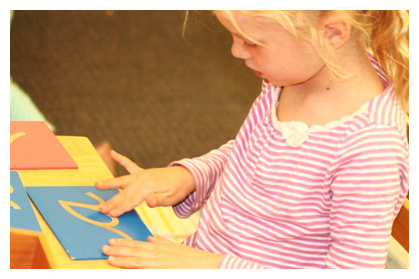 Note also that in our schools, we begin by teaching cursive handwriting, just like Dr. Montessori did: moving the pen in one smooth motion throughout a word is easier for the child than lifting it for each letter. Cursive writing also eliminates the common error of reversing such letters as “d” and “b”, and it enables the children to write faster and more beautifully, once they become proficient at handwriting. (Contrast this approach with the typical non-Montessori school, where children first learn print letters in Kindergarten, and then have to relearn how to write in 3rd grade, when cursive writing is introduced almost as an afterthought.)

Word building: Movable Alphabet. Next, children learn to compose words with the “movable alphabet,” a boxed set of individual lower-case letters. To begin this activity, the teacher uses the same materials used in the sound games – miniature objects representing three letter words with the short vowel sound – and a box of lower-case wooden letters of the alphabet. The child selects an object, such as a cat, and slowly says its name, so he can hear each sound – c….a….t. He then selects from the box the letter representing the first sound, and puts it next to the object on his mat. Next, he listens for and selects the second letter, and finally the third. He thus “builds words” – without the added complexity of having to form the letters by writing them with a pencil.

Further writing and reading activities. Once the child has started writing (see “What we deliver” to learn about the “explosion into writing”), she naturally progresses to reading. Our classrooms offer a wide variety of reading activities – “noun cards”, which children match to pictures; “command cards”, which give a child a command to act out, such as “sit”, or “jump”, and, later, “open and close the door”, or “serve yourself a drink;” phonograms, which introduce sounds of the English language which are made up of two or more letters, such as “sh” as in “ship”, “air” as in “fair” and “tion” as in action. Our students also learn common non-phonetic words, or “puzzle words”, such as “does”, “the” and “one.” 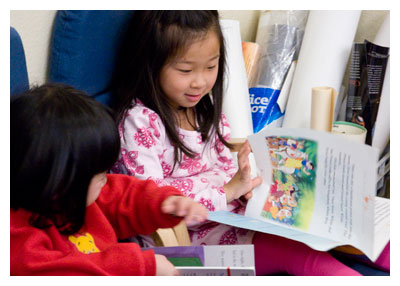 Books – our reading corner. Each LePort classroom has a reading shelf – and once our students know how to read, we often find them engrossed in a book that interests them, or reading a book to their younger classmates. In our schools, children acquire, from an early age, a love of reading and an ability to learn from books.

Reading and Writing: Learned and Loved 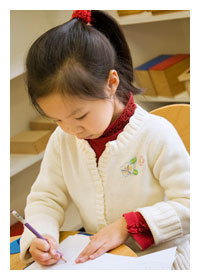 Once our students have sufficiently automated the components of handwriting and related the letters to their sounds (typically by age 4 ½ to 5 ½), they arrive at what Dr. Montessori called an “explosion into writing,” whereby they rapidly begin to write whole words with ease.

Shortly after this explosion into writing (and in some cases beforehand), a LePort student begins to read. Because she has automated the symbol-sound correspondence by means of the aforementioned materials, she already has a strong foundation in phonics – and because of our focus on vocabulary development, she has a broad range of concepts she understands. She can therefore decode almost any word she may encounter, and once she sounds out the word and hears it spoken she can recognize it more readily in the future.

Unlike the “look-say” and “whole language” approaches to reading, which attempt to teach children to recognize whole words on sight (treating English as if it were a pictorial system such as Chinese languages) and thus hamper the learning process, our approach toreading is entirely phonics-based. It teaches children to write and to read by focusing first on the shapes and sounds of letters, and then on combinations of letters and their corresponding chains of sounds. By providing children with materials that interest them on a sensorial level, and then building step-by-step from that base to the higher-level skills, we help children not only to learn to write and read, but also to love to write and read.

By the end of Kindergarten (age 5 ½ to 6 ½), a typical LePort student demonstrates capabilities that far exceed those of 1st or 2nd graders taught to the California English Language Arts Standards.