A 3 ½ or 4-year old child is fascinated with manipulating things, with patterns, and with small objects. He enjoys repeating activities, and exploring concrete items with his hands. Our Montessori math program builds upon this developmental phase: we introduce preschool children to the fascinating world of numbers through enjoyable activities, which are carefully designed to impart mathematical knowledge to our students.

By starting early, and drawing on the child’s natural interests, we enable our students to gain a head start in numeracy – and, more importantly, a confidence in their own ability to do math, and to do it well. Instead of the math phobias that many children acquire in elementary school, where arithmetic operations are introduced as abstract, mechanistic operations to be memorized even if not understood, our 6-year-old students master the basics of arithmetic using concrete materials, and they therefore acquire a grounded understanding of the meaning of these operations. When they leave LePort Montessori, our students have a double advantage: they have learned many mathematical concepts and math facts typically only taught in 2nd or 3rd grade, before they even enter elementary school – and they have learned to enjoy math.

When my daughter was five, she came home with five sheets stapled together. She was quite proud of herself and said, “I can add fractions.” I checked the sheets and, sure enough, she had completed five pages (each page had about 20 fraction addition problems). I asked her, “What does the red box around some of the equations represent?” Her reply, “they’re equivalent—they had to be reduced. Did you know that 4/6 is equivalent to 2/3?”

Counting, The Decimal System and Arithmetic into the Thousands: Elementary School Math Taught so a Preschooler Enjoys Learning It

In our Montessori classrooms, children begin dealing with numbers early and in multiple ways – (counting snack items, getting four colored pencils for the “inset work,” etc.) and soon advance to manipulating things in terms of ten (ten cylinders, ten color tablets, ten pink cubes) in preparation for learning the decimal system. They then build on this experience by using the Montessori math materials, which can take them all the way from basic counting to the four operations of arithmetic into the thousands – all by the end of their 3rd preschool year (the “Kindergarten year”.) 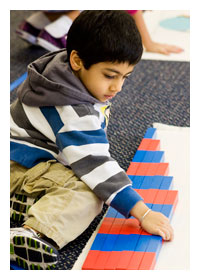 Counting – Number Rods and related materials. Dr. Montessori recognized that a very young child (age 3 – 4) often has trouble understanding how to count by adding one unit to another. She found that children struggle to realize that the increasing whole must be considered: often, a child would count “1, 1, 1” instead of “1, 2, 3.” Therefore, a child in a Montessori classroom is introduced to numbers with the Number Rods, a series of 10 which increase in units from 1 to 10 – each number being represented by one rod, with the units marked in alternating red and blue stripes.

The child can thus handle the Three – the rod with three alternating stripes, or the Ten, as one item. The child sees “Three” or “Ten” as a set, a unit of three or ten things, that can be broken down into three or ten individual things, and hence he acquires the basic idea of a number. The teacher helps the child count the alternating red and blue sections of each rod as he arranges them in an attractive stair formation. Later, when he has learned to write the numbers using Sandpaper Numerals, he puts number cards next to the rods to illustrate that quantity. He can also discover many mathematical facts – for instance, many children will place the One rod on top of the Nine rod, to make Ten, the Two rod on top of the Eight rod and so on, thereby demonstrating to themselves the different ways in which two smaller numbers can add up to Ten.

Once the child has mastered counting to ten, he can practice counting using other materials. For instance, he can use the Spindle box to count out 45 units into compartments labeled 0 – 9; he can use the Numerals and Counters, which introduce the concepts of odd and even; he can use the Seguin Boards, which represent first the “teen” numbers and then enable the child to construct numbers from 11 to 99. 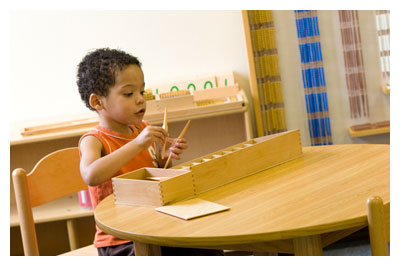 Arithmetical Operations: Bead Stairs. The Bead Stairs are akin to the Number Rods. Various quantities of beads are strung on wire to represent the whole numbers through 10. The bars are made of different color beads, according to the numerical value of the bar: The 10-bead bars are orange; the 9-beads are dark blue; the 8-beads are brown, and so on; the bead bars can be arranged by their numeric value to form an attractive bead stair. Five- to six-year-olds enjoy manipulating these materials, and fill page upon page with math work using them. By working with color-coded chains, they quickly learn to move from counting to abstract calculations. In Dr. Montessori’s words:

Little by little the child ceases counting the beads and recognizes the numbers by their color: the dark blue he knows is 9, the yellow 4, etc. Almost without realizing it he comes now to count by colors instead of by quantities of beads, and thus performs actual operations in mental arithmetic. As soon as the child becomes conscious of this power, he joyfully announces his transition to the higher plane, exclaiming “I can count in my head and I can do it more quickly!” 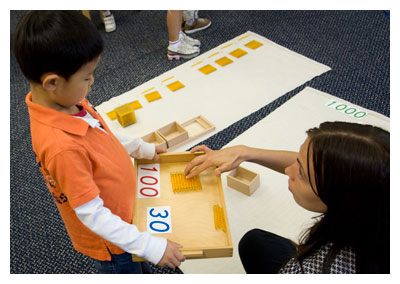 Place Value & Large Quantities: Golden Bead Materials. The Golden Bead Materials introduce our student to the concept of place value – i.e., the Decimal System. This material includes individual beads or single “units”, strings of ten beads or “ten bars”, ten ten-bars combined into a “hundred square” and ten hundred squares combined into a “thousand cube”. Number cards go along with these beads – with Units printed in green, Tens in blue, Hundreds in red, and Thousands in green. With these cards and beads, children build large numbers: the teacher may, for example, make a number with the cards, such as 3,572 – and ask the child to bring her the corresponding number of beads – that is, 2 Units, 7 Ten Bars, 5 Hundred Squares and 3 Thousand Cubes.

Children continue to work with these and related materials for a long time – learning how to add, subtract, multiply and divide. They also obtain a perceptually grounded awareness of quantity: a related material, the thousand chain, consists of ten hundred-chains strung together – and measures twenty feet in length. 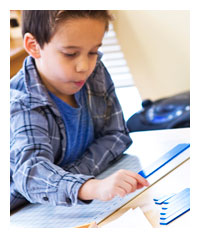 Further mathematical materials. As our groups are multi-age, and as children progress at different speeds, especially in mathematics, we offer a wide variety of additional mathematical materials in each classroom. Children learn about fractions with the fraction circles and skittles; they learn skip counting and multiplication with colored bead materials which expand upon the colored bead stair; they learn division with a Division Board, where division is introduced as sharing quantities between people, represented by skittles; they practice addition and subtraction with Strip Boards; they arrange the numbers to 100 in order using the Hundred Board. (Geometry, an important part of the Montessori primary classroom, is included among the Sensorial Exercises.)

All of our primary classrooms contain materials appropriate through first grade – for example, the bead frames – and our teachers are trained in their use (in contrast to some other Montessori preschools, where students generally leave before the kindergarten year, and where teachers are often unfamiliar with the more advanced math materials and therefore not able to help a mathematically gifted child advance as far as he could.)

A Self-Paced, Sequential Progression from Concrete Manipulatives to Abstract Operations 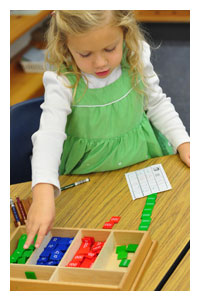 Since mathematics is the science of measurement—of bringing quantities outside of our perceptual range into a form we can hold in our minds—we introduce mathematics by having our students experience perceivable quantities and then derive abstract numbers, the essentials of the decimal system, and of arithmetical operations from them.

Throughout our mathematics program, we start with concrete manipulatives. In contrast to many other preschool and elementary programs, however, where the counters are often just that, unconnected counters with no further use, our Montessori math materials are deliberately structured to teach specific mathematical concepts and principles: the bead stairs enable children to progress naturally from counting to abstract operations; the Golden Beads teach the decimal system; the Division Board visualizes what division is – sharing a given quantity between people.

The scientific, proven approach behind Montessori also ensures that we teach math in a developmentally appropriate way. For example, the Number Rods enable the very young child to handle “Three” as one unit – and thus enable her to understand counting earlier than she otherwise would. They are also structured sequentially, with each material and activity building logically upon the next. For example, once the child understands the Decimal System (Place Value), he can progress to adding two four-digit numbers – first without carrying and then with carrying. Throughout, the materials ensure that the child’s knowledge remains tied to reality – that she understands what carrying a number in addition really means (that is, exchanging ten Ten Bars, for example, for one Hundred Square), as against just memorizing a series of process steps. 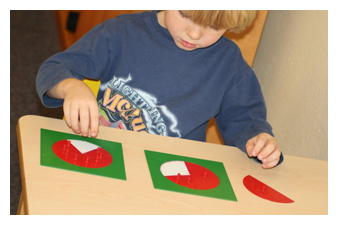 We also understand that especially in mathematics, children progress at different speeds. We therefore equip all of our primary classrooms with math materials that can take a child all the way through 1st grade Montessori elementary, and ensure that our teachers are trained in their use. This, combined with our three-year age grouping (ages 3-6 in one classroom), enables each child to learn the basics of mathematics at his own pace, to go as fast or as slow as his interests and abilities allow him, fueled by a genuine desire to understand and master, without even a thought of comparing himself to his peers.

By offering a developmentally appropriate and progressively challenging series of mathematical activities, we enable our student to advance far in mathematics – and to enjoy discovering the capable mathematician within themselves.

Confidence in Dealing with Numbers, and a Natural Enjoyment of Solving Mathematical Problems

Confidence in dealing with numbers, and a natural enjoyment of solving mathematical problems: this is the most fundamental benefit of LePort’s Montessori math program.

Rather than being introduced to bewildering, abstract numbers with pencil-and-paper in elementary school, and being frustrated and bored in math class; rather than encountering disconnected manipulatives and demands to “construct” their own “creative” mathematics and being confused – our students experience mathematics as a natural, joyful process of discovering how numbers work.

As they work with the materials; as they progress from simple counting, to addition and subtraction with beads; as they first perceive and understand single digits, then teens, then the intricate, amazing structure of the decimal system – our students experience themselves as capable young mathematicians, and come to view mathematics as a fun challenge to tackle. They acquire, if not always an effusive love of mathematics, then at least an appreciation for its power, and a perception of math problems as rewarding mental exercises that can successfully be completed. No “math phobia” for our students!

Since we introduce mathematics early, and since our students can work with the materials daily and for as long as they desire, our students are also quite advanced in their understanding of math facts. The following table lists the skills our students learn by Kindergarten, as well as the grade by which such knowledge is expected from public school students per the California Mathematics Standards for public schools.