When you read the following quotes, what learning environment would you guess that the author is describing?

At the end of the day, however, the fact is that we educate ourselves. We learn, first of all, by deciding to learn, by committing to learning. This commitment allows, in turn, for concentration.

Denied the opportunity to make even the most basic decisions about how and what they will learn, students stop short of full commitment.

Students should be encouraged, at every step of their learning process, to adopt an active stance toward their education. They shouldn’t just take things in; they should figure them out. … If you think about it, asking kids to be active is nothing more than asking them to be their natural selves. … Students are not naturally passive. Perversely, they need to be taught to be passive. … Active learning, owned learning, also begins with giving each student the freedom to determine where and where the learning will occur.

Once a certain level of proficiency is obtained, the learner should attempt to teach the subject to other students so that they themselves develop a deeper understanding. As they progress, they should keep revisiting the core ideas through the lenses of different, active experiences.

This kind of learning fosters not only a deeper level of knowledge, but excitement and a sense of wonder as well. Nurturing this sense of wonder should be education’s highest goal; failing to nurture it is the central tragedy of the current system.

To state what should be obvious, there is nothing natural about segregating kids by age. That isn’t how families work; it isn’t what the world looks like; and it runs counter to the way that kids have learned and socialized for most of human history. … Take away this mix of ages and everybody loses something. Younger kids lose heroes and idols and mentors. Perhaps even more damagingly, older kids are deprived of a chance to be leaders, to exercise responsibility, and are thereby infantilized.

The author above sounds a lot like another educator, who proposed an approach very similar to the one above:

Education is not something which a teacher does, but [is] a natural process which develops spontaneously in the human being. It is not acquired by listening to words, but in virtue of experiences in which the child acts on his environment. The teacher’s task is not to talk, but to prepare and arrange a series of motives for cultural activity in a special environment made for the child.

Discipline in freedom seemed to solve a problem which had hitherto seemed insoluble. The answer lay in obtaining discipline by giving freedom. These children, who sought their work in freedom, each absorbed in a different kind of task, yet all belonging to the same group, gave an impression of perfect discipline.

The education of today is humiliating. It produces an inferiority complex and artificially lowers the powers of man. Its very organization sets a limit to knowledge well below the natural level. It supplies men with crutches when they could run on swift feet. It is an education based on man’s lower powers, not on his higher ones.

There are 60 years separating these sets of quotes: the top six are from The One World Schoolhouse, by Salman Khan, the founder of the Khan academy, published in 2012. The bottom four are by Dr. Maria Montessori, in The Absorbent Mind, first published in English in 1949.

I recently read Mr. Khan’s book, and as someone familiar with Montessori, I found it fascinating. It describes, in essence, how we could use technology to more fully apply the principles of Montessori education for the upper grades. I’d go as far as to characterize it as an applicationof Montessori principles. The problem with that characterization, however, is that throughout the book, Mr. Khan does not mention the Montessori method. Not even a single time!

Salman Khan is perhaps the most famous of the wave of innovation sweeping educational technology.  Mr. Khan’s innovation, however, goes far beyond merely incorporating technology into the classroom. Although made possible by technology, it is at root a pedagogical innovation.  Mr. Khan’s core idea is that we "flip the classroom" from the traditional model. In most schools today, children sit in class, listening to a teacher delivering a lecture, solving sample problems on the board. They are then sent away with homework, and asked to apply what they learned on their own, without either teacher or another student there to help them. In this model, "homework becomes necessary because not enough learning happens during the school day."

In the classroom envisioned by Mr. Khan, the approach would be reversed: students would independently, individually watch recorded lectures on iPads or other devices. They’d be able to repeat unclear sections, or watch another video that explained things from a different perspective. The iPad, in this approach, would serve to present conceptual levelcontent analogous to the way Montessori materials present perceptual level content in the earlier stages of a Montessori education. Assessment modules on the iPad would allow students to check their basic understanding of the materials, to engage in a first-level application through work of what they have learned. The teacher wouldn’t need to be involved in grading or correcting the work: the computer would be the control of error.

Mr. Khan emphasizes that his computer-based lectures are merely tools for a revolution in the classroom. His descriptions of his ideal school, in fact, sound a lot like what a Montessori adolescent community might look like. Just read these quotes about different aspects of the school he envisions:

I believe that the school of the future should be built around an updated version of the one-room schoolhouse. Kids of different ages should mix. Without the tyranny of the broadcast lecture and the one-size-fits-all curriculum, there is no reason it can’t be done.

But rather than three or four separate classes of twenty-five kids and one lonesome teacher, I would suggest a class of seventy-five to a hundred students with three or four teachers. To me there are several clear advantages to this, all of which stem from the enhancement of flexibility in a system such as this.

The students would seldom if ever all be doing the same thing at the same time. And while nooks and alcoves within this imagined school might be perfectly quiet for private study, other parts would be bustling with collaborative chatter. At any given moment, perhaps one-fifth of the students would be doing computer-based lessons and exercises aimed at a deep and durable gasp of core concepts … with one of our team teachers circulating among them, answering questions, troubleshooting difficulties as they occur. The feedback and the help are virtually immediate, and the twenty-to-one ratio is augmented by peer-to-peer tutoring and mentoring—a central advantage of the age-mixed classroom.

But what about the other eighty students? I can see (and hear!) a boisterous subgroup learning economics and trying out market simulations by way of board games such as those we’ve used with good effect at our summer camps. I would have another group, divided into teams, building robots or designing mobile apps or testing out novel ways for structures to capture sunlight. A quiet corner of the room could be devoted to students working on art or creative writing projects. A less quiet corner would be reserved for those working on original music.

The most important aspect of this is that it would carve out space and time for open-ended thinking and creativity for all students. In today’s schools, it’s not hard to find "different-thinking" students who are too often neglected, misunderstood, and either alienated or simply left behind by the rigid standard curricula. I’m talking about the kind of kid … who becomes obsessed with solid geometry and isn’t ready to let I go when the lesson ends, but rather wants to derive its equations and spin out its implications all on his own. Or the kid who is happiest racking her brain over a math problem that might not even have a solution. Or formulating an approach in engineering that has never even been tried.

These are the kinds of curious, mysterious, and original minds that often end up making major contributions to our world; to reach their full potential, however, they need the latitude to follow their own oblique, nonstandard paths.

I believe that a big part of the reason kids revere and obey their coaches is that the coaches are specifically and explicitly on the student’s side. … The teacher, like a coach, needs to emphasize that anything less than mastery won’t do because he or she expects you to be the best thinker and creator that you can be. 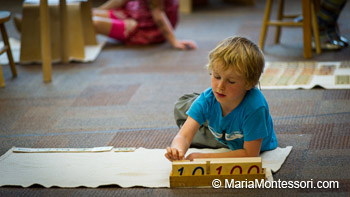 Such words are music to a Montessori educator’s ears! There is much more of the same wonderful vision in Mr. Khan’s book, and clearly much his way of re-imagining education has in common with Montessori.

Just think about what could be accomplished if the global reach of Mr. Khan’s technology-based efforts were combined with the world-wide network of mixed-age, co-taught, individualized Montessori classrooms?  Just imagine how much power the practical genius of Mr. Khan could have if embedded in the profound, philosophic account of human development offered by Maria Montessori?

While there are undoubtedly differences in the two approaches, what strikes me most is the similarity of the over-arching vision. It seems to me that Mr. Khan and the Montessori movement are fellow travellers headed in the same direction, but who have yet to find each other. Maybe you, dear MariaMontessori.com readers, can find a way to help make an introduction, and begin a dialogue that has the power to transform the world?

In Montessori, True Creativity Forms Below the Surface
Scroll to top